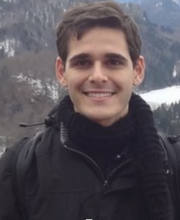 Graduated from Univeristy of Campinas (Brazil), earning his bachelor's degree in Computer engineering. From 2012-2014 he attended the Grand École Télécom Paristech (Paris, France) earning a Master of Engineering degree in Telecommunication engineering with a major in information systems and data science. In 2018, Tiago received his PhD degree from University of São Paulo.

Tiago Silva’s research activities concern the development of tools, algorithms and workflows for genomic and epigenomics integrative analysis. Among the software tools developed and under development with his collaborators are TCGAbiolinks, TCGAbiolinksGUI and ELMERv2,  which are being applied to several Genomic Data Analysis Network (GDAN) projects.